August 22 Update: The book is done!
Buy it Here 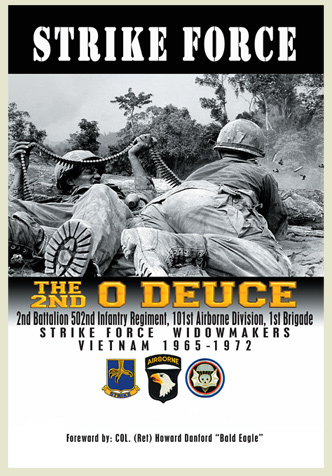 The Introduction to the book(s) may be read on the link above. 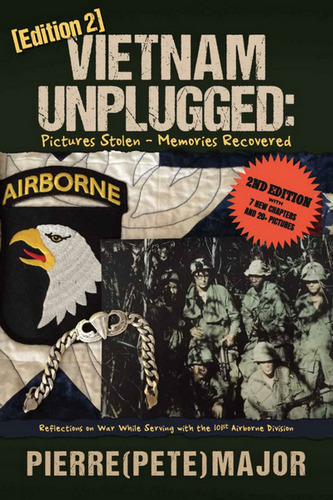 I served as an Infantry soldier with the 101st Airborne Division in Vietnam. Much, but not all of the contents deal with my day to day experiences encountered during my time there.

A good portion is a "bottoms up " perspective from my view as an enlisted soldier.

Let me begin at the end of my tour in vietnam.

I'm in the airport waiting lounge at Tan Son Nhut, Saigon (now renamed Ho Chi Min City) waiting for my ﬂight to be announced. My new orders call for me to be reassigned to a yet- unnamed outﬁt in Okinawa. My Class A uniform lost at the cleaners last minute, I am still dressed in jungle fatigues.

A good portion of the people are military with a nice sprinkling of civilians. I am totally relaxed, not having to walk on the edge of death anymore. Soaking up the good vibes of my surroundings, in a bittersweet way I am ready to put this chapter of my life behind me. Happy and extremely lucky to be leaving with all the body parts I arrived with, unlike many others, a cloud hovers knowing my friends remain in the darkness of the Boonies with more to follow in the months ahead.

The sound of explosions came our way, not too far from the airport, and many people nearby scramble for cover. I remain at ease.

My hearing, one of my more ﬁnely tuned senses, instantly recognizes the explosions as “outgoing” artillery ﬁre, as opposed to “incoming,” the kind designed to really make you jump. Those who have scrambled away now drift back to their seats.

After Shock - Poems and Prose from the Vietnam War

Jim Nye served two 12-month tours of duty in Vietnam, the first in the 101st Airborne and the second in the 5th Special Forces Group, he says of this book, "Some of these things happened, some did not. But that does not matter because all are true. This is my attempt to realize and communicate that truth."

One of the reason's I like Jim Nye's poetry is because of its very humane disposition, an attitude of courage and vulnerability that I find admirable and necessary in order for language to leap into the magical realms of the poem and its possibilities. And, it's nothing more than being honest and thoughtful. These poems are fragments of the poet's life, and within each fragment I sense a whole. I sense the poet striving to connect the pain to meaning, to connect love to a real moment and to an understanding of that moment. And, ultimately, I sense a poet trying to heal in himself, through poetry, the wounds and loves and confusions of life. Jim Nye belongs to no school of poetics, except that school of living a life full of contradictions and risks. His is not a willful poetry. The very tone of his work denies any futile positioning, but, instead it takes up the business of trying to understand and being honest with the answers. Permeating the text of the poems is a severe, calm approach, the approach one takes like a devote pilgrim, one step at a time, toward a given end. 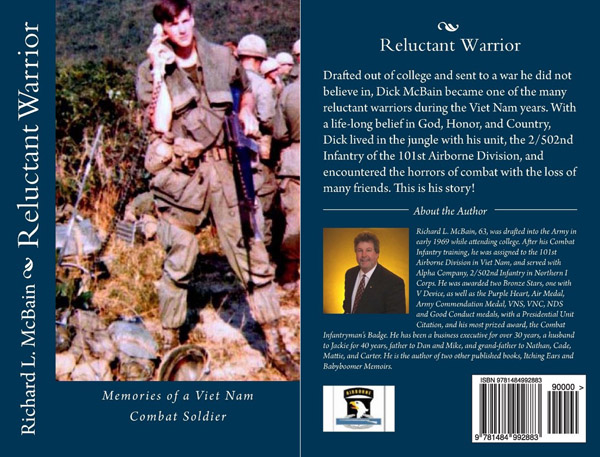 The story of an everyday college kid drafted into the horrors of jungle warfare and his many close encounters with death. The reader will clearly be able to envision just what went on in Viet Nam through the incredible descriptive narrative and pictures tied to each story that the author depicts. The book contains true stories of friendly fire incidents, real brotherhood among units, and even a secret CIA mission the author was involved with in testing an early beacon air strike. The feelings of the soldiers in relation to the upheaval in America against the war, the Kent State debacle, and the refusal of our government to let us win are all described in this book.

For Which We Stand (poem)

Mighty Men Of Valor - With Charley Company on Hill 714 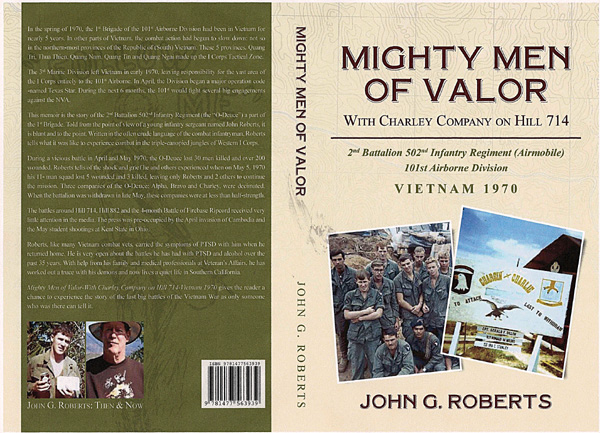 In the spring of 1970, the 1st Brigade of the 101st Airborne Division became involved in Operation Texas Star which led to the last big battles of the Vietnam War. These battles received very little attention in the media back in the world, but they were significant. The author, John Roberts, served in the 1st platoon of Charley Company, 2/502 from January to December, 1970. His book, Mighty Men of Valor - With Charley Company on Hill 714, Vietnam, 1970 is the story of the fight to take Hills 714 and 882 west of the Song Bo River in April and May of 1970. It is Roberts' personal story as well. Using his letters home to his family, interviews from his fellow Charley Company veterans, after action reports and battalion daily journals, he tells in detail the story of Charley Company and the O-Deuce during that fateful year of 1970.

“If you've already read James Brinker's story of the Recon Platoon in West of Hue - Down the Yellow Brick Road and Eraldo Lucero's story of Alpha Company in Echoes of a Distant Past - Screaming Eagles, then this new book about the O-Deuce will complete the picture of Operation Texas Star, Operation Jefferson Glen, Come Back Ridge and the mighty men of valor who fought the battles..”

Echoes of a Distant Past 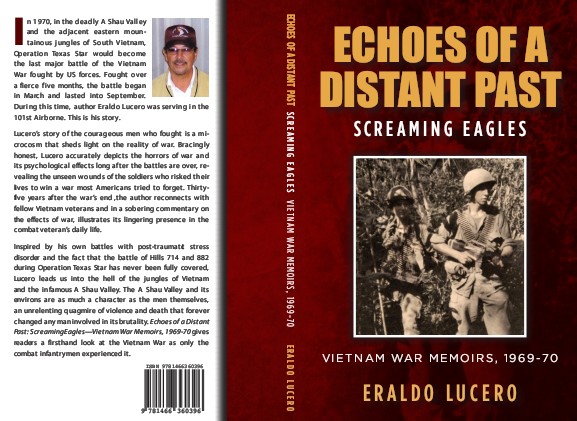 “In 1970, in the deadly A Shau Valley and the adjacent eastern mountainous jungles of South Vietnam, Operation Texas Star would become the last major battle of the Vietnam War fought by US forces. Fought over a fierce five months, the battle began in March and lasted into September. During this time, author Eraldo Lucero was serving in the 101st Airborne. This is his story.

Lucero's story of the courageous men who fought is a microcosm that sheds light on the reality of war. Bracingly honest, Lucero accurately depicts the horrors of war and its psychological effects long after the battles are over, revealing the unseen wounds of the soldiers who risked their lives to win a war most Americans tried to forget. Thirty-five years after the war's end, the author reconnects with fellow Vietnam veterans and in a sobering commentary on the effects of war, illustrates its lingering presence in the combat veteran's daily life.

Inspired by his own battles with post-traumatic stress disorder and the fact that the battle of Hills 714 and 882 during Operation Texas Star has never been fully covered, Lucero leads us into the hell of the jungles of Vietnam and the infamous A Shau Valley. The A Shau Valley and its environs are as much a character as the men themselves, an unrelenting quagmire of violence and death that forever changed any man involved in its brutality. Echoes of a Distant Past: Screaming Eagles–Vietnam War Memoirs, 1969-70 gives readers a firsthand look at the Vietnam War as only the combat infantrymen experienced it.”

Buy Echoes of A Distant Past at Amazon

When You Hear the Bugle Call
Thoughts, Memories and Tears

Both books are available at "Grif"'s Griffin's Lair website

WARRIORS REMEMBERED is a 240-page, 11½" x 11½" hard cover photo documentary of Vietnam Veterans Memorials from all 50 states with stories of their significant features, locations and the motivation and struggle faced by those who built them. It highlights 100 memorials and their creators, and shares some of each memorial's subtle details. WARRIORS REMEMBERED is both a travel log and a documentary.

Differing from memorials of other wars, here you will find no white granite generals or parade ground uniforms. Rather these memorials include names of the fallen engraved on black granite, dark bronze fighting men, or the wounded and the nurses who cared for them. Often they reflect the anguish of war and its aftermath. The author is eternally grateful to the selfless warriors and families who created these places of recognition, reflection and "welcome home" and who assisted with this book by sharing their stories.

Every memorial is unique and has its own unique story. Years of research have given Albert Nahas a perspective to make each memorial come to life with details and anecdotes most visitors would not uncover on their own. Excellent work for all war veterans.

Lt. Gen. Harold G. Moore USA (Ret.) and Joseph L. Galloway
Authors of We Were Soldiers Once... and Young and
We Are Soldiers Still: A Journey Back to the Battlefields of Vietnam

Serving Our Country And Paying the Price: The Story of Recon 2/502 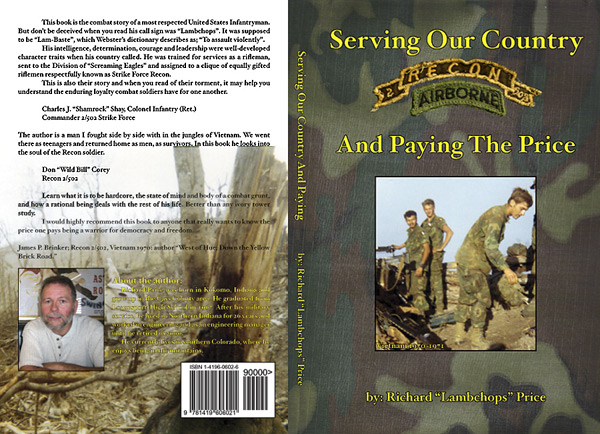 This book is the combat story of a most respected United States Infantryman. But don't be deceived when you read his call sign was "Lambchops". It was supposed to be "Lam-Baste", which Mr. Webster describes as "to assault violently".

His intelligence, determination, courage and leadership were well-developed character traits when his country called. He was trained for service as a rifleman, sent to the Division of Screaming Eagles and assigned to a clique of equally gifted riflemen respectfully known as Strike Force Recon.

This is also their story and when you read the torment, it may help you understand the enduring loyalty combat soldiers have for one another.

The author is a man I fought side by side with in the jungles of Vietnam. We went there as teenagers and returned home as men, as survivors. In this book the author looks into the soul of the RECON soldier.

Learn what it is to be hardcore, the state of mind of a combat grunt, and how a rational being deals with the rest of his life. Better than any ivory tower study.

I would highly recommend this book to anyone that wants to know the price one pays being a warrior for democracy and freedom.

Buy Serving Our Country At Amazon.com 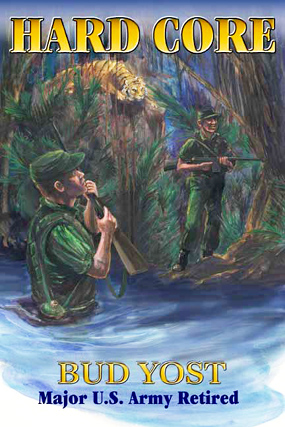 Death always stalked close to the “Hard Core” squad in the jungles of Vietnam, but now they faced another threat. These paratroopers of C Company of the 502nd Airborne Infantry had already endured relentless, fierce close combat with Viet Cong and the North Vietnamese Army, often times facing overwhelming odds. Besides fighting a formidable enemy, they also had to battle the harsh elements of the jungle: excessive heat, insects, snakes and leeches, jungle foliage and thorns ripping into their skin - causing festering infections, jungle rot, constant dysentery, malaria and other maladies, and months of being soaked from monsoon rains and filth and bone-wearying fatigue.

On March 5, 1967, near Song Mau, the squad was on a reconnaissance patrol when they encountered a new and unexpected enemy, a large Bengal tiger. The tiger was stalking and about to pounce on the point man, PFC Wendell Rose, when SSG Bud Yost and SP4 Jim Buppert killed it. This encounter was just another saga added to the exploits of the “Hard Core” squad.

West of Hue - Down the Yellow Brick Road 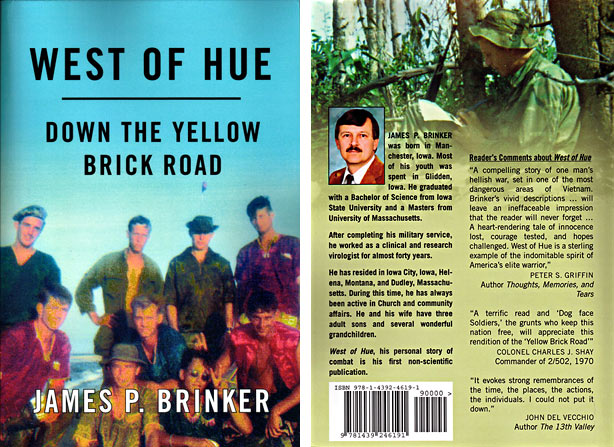 This is the personal story of a 2/502 Recondo in the 101st Airborne Division in Vietnam 1970. Vivid recollections of the battles for hills 714 and 882 where 30 brave Strike Force troopers died are described. It is also a story of the difficulties of going home and his ultimate redemption.

Buy West of Hue At Amazon.com